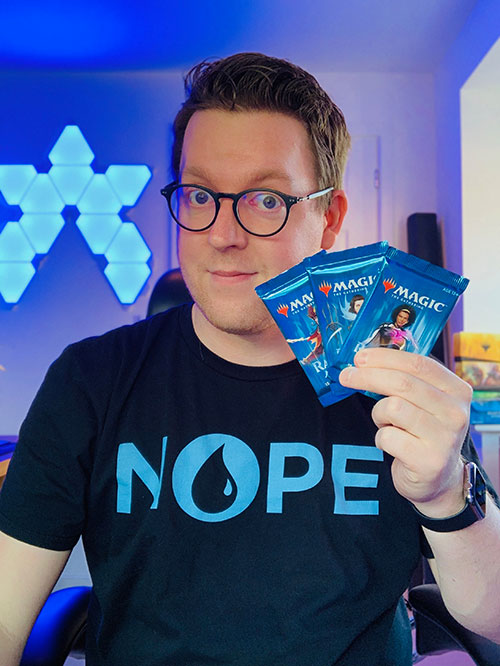 I'm Ben Dodson, a 30-something guy in the UK that makes a living as a freelance iOS app developer. I played Magic briefly a decade or so back and got reacquainted with it during the Kaladesh cycle. However, it was a board game weekend with some good friends and the Ixalan cycle that truly grabbed my attention; what's not to love when you have dinosaurs, pirates, and vampires? Oh, and merfolk.

Since then, I've become a rabid collector of cards (4962 of them currently) whilst Magic The Gathering: Arena has let me hone my skills with daily gameplay sessions. I've always believed that to get better at something you should write about it; as I started watching people talk about spoilers prior to Ravnica Allegiance, I realised I too could share my thoughts on various cards and thus The Plainswalker was born. Since spending some time looking at the cards in more detail, I've definitely seen my game improve and I hope yours will too!

My intention here is to try and showcase some cards and decks that may spark your interest whilst also looking at a bit of the history and synergy across sets. As I only started collecting properly with Ixalan (and as it is handy being that is the earliest set still in Standard at the time of writing), this website is only really concerned with cards from that period onwards. I'll occasionally make reference to all kinds of historical abilities but Standard is my main focus. Alongside that, whilst I personally dabble in a bit of Modern and Commander, I'm not planning on devoting any real time to writing about those variants or others.

In terms of audience, I'm mainly talking to those of you who have begun playing Magic at a similar time. Maybe you were lured in by the dinosaurs of Ixalan, the history of Dominaria, or a starter kit in Core Set 2019; maybe you got interested in Magic after playing Arena; perhaps you're a long-time Magic fan but just want a way to keep up with what is new. Regardless, I hope I'll be able to provide you with an in-depth look at some cards and give you some deck ideas that you can make your own.

I regularly stream my Magic: The Gathering Arena sessions over on Twitch at The_Plainswalker. I generally play every Monday at around 9.30pm UK and will either be testing out new deck ideas or practicing with one of my established decks in preparation for a tournament. My streams are usually pretty chilled with some background music and a lot of chat interaction so come along and say "Hi".

If you want to get in touch with me about anything related to Magic, you can either send me a public message on Twitter (@ThePlainswalker) where I can share a reply with other followers or you can send me a private message via email to ben@theplainswalker.com. You can also join my Discord community to discuss Standard Magic with me and other like-minded folk. I'm always happy to hear your ideas for cards you want me to write up, deck techs you'd be interested in, or in your constructive feedback about the site in general.

First of all, yes, I know how to spell Planeswalker. What got me onto the name was looking at the various lands and wondering why only plains were plural when forest, island, mountain, and swamp were not. In geographical terms there is no reason why something can't be a "plain" singular (i.e. Salisbury Plain) and the fact that there are already planes in Magic The Gathering makes it all the more confusing. The deciding factor when choosing a name for the site was an idea in my mind of a normal guy walking the plains accidentally being called a Planeswalker; that and the domain name was available.